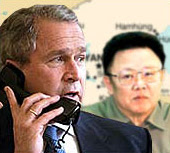 News Item: "President Roh Moo Hyun of South Korea on Tuesday called for a meeting of the leaders of the United States, China and the two Koreas in order to speed up North Korea's denuclearization and achieve a peace treaty on the divided Korean Peninsula.
When Roh met with the North Korean leader, Kim Jong Il, in October, the two men agreed on the need for negotiations to formally conclude the 1950-53 Korean War. That conflict ended in a cease-fire rather than a peace treaty, leaving the peninsula technically in a state of war.
But until Tuesday, no leader had publicly called for such a summit meeting, which would bring the leaders of all four major parties to the Korean War together for the first time. The U.S. and North Korean leaders have never met."

Commentary: Will President Bush call on Chairman Kim Jong Il? A meeting between the sitting leaders of the US and DPRK would be akin to the historic meeting between President Nixon and Chairman Mao in 1972 that normalized relations between the two long-time enemies. All of the leaders of surrounding countries in Northeast Asia -- China, Japan, Russia, South Korea -- have met the North Korean leader -- with the sole exception of the US. The closest high-level contact was the Secretary of State Madeleine Albright's 2000 meeting with Kim in North Korea and the reciprocal visit by Vice Chairman Jo Myung-rok to the White House with a meeting with President Clinton. The promise of normalization in the 1994 Agreed Framework agreement between the two countries is long overdue.