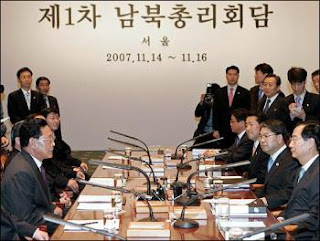 News Item: "A regular freight train service over the heavily-armed border between North and South Korea could start before the end of the year, officials say. The deal, on the second day of talks between prime ministers from the two countries, marks the first agreed schedule for the train link."

Related Document: Agreement at the First South-North Prime Ministerial Talks on Implementing the Declaration on the Advancement of South-North Korean Relations, Peace and Prosperity