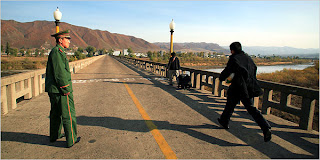 Korea languished for many decades in its aspirations of reunification as most of the world's remaining divided lands became reunited. Now, is inter-Korea reconciliation process becoming an example to other divided lands?

Zhang Quanyi, an associate professor at the Zhejiang Wanli University in Ningbo, China writes this commentary: "The Korean process of seeking reunification of their divided land bears watching. The approach to resolving issues of ideology, economy, military and political arrangements may hold suggestions for the process of Chinese unification. After all, the Koreans have already started talking. Sitting down and talking together is the ideal approach to unification, whether of Korea or China."