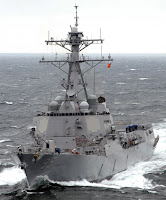 News Item: "A U.S. Navy destroyer helped a North Korean cargo ship escape a hijacking by pirates off Somalia Tuesday, an incident which may bode well for the growing detente between the two nations, as sentiments remain upbeat over ongoing talks on the North's denuclearization." More.

Commentary: Can you believe this unlikely scenario? A North Korean cargo ship sends distress signals after being overtaken by pirates off Somalia. Then swiftly, a US navy ship responds by coming near the North Korean ship and tells the pirates to disarm, at which point the North Korean crew fights off the pirates and retake their ship. The wounded North Koreans get treated medically abroad the US ship. Who would have imagined such a "cooperation" between the US and its sworn enemy North Korea? Hollywood screenwriters -- take note please.

[In a related development on Nov. 2, US navy ship escorted two South Korean ships to safety after Somali pirates released the crew after nearly six months of captivity. In a strange string of events off the Somali coast, the US came to aid of both North and South Korea. -ed.]

[Followup news: "The North's Korean Central News Agency hailed the rare maritime collaboration as a 'symbol of cooperation' between the two countries 'in the struggle against terrorism,' and pledged to work with the international community to fight terrorism."-- North Korea even thanked the US for this incident. Washington, take note -- North Korea and the US are now partners in the fight against terrorism.]