Captured Flag Returns to Korea After 136 Years in the US 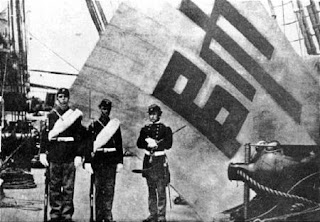 The flag of General Eo Jae-yeon of the Joseon Dynasty, the garrison commander of Ganghwa Island, confiscated by the US military (photo), during the US military expedition to Korea in 1871 (Sinmiyangyo, 신미양요) and displayed in the US Naval Academy museum since that time as a war booty, was returned to South Korea recently on a "permanent loan" -- perhaps acknowledging a political incorrectness during these times of close US-ROK relations.

The 1871 clash with the Koreans at Ganghwa Island was the first US military expedition in Korea, leaving 350 Koreans and 3 Americans dead. The incident occurred as the US tried to open up isolationist Korea, with guns backing diplomacy (as in "gunboat diplomacy"). The mission failed, but in 1882, Korea and the US signed a treaty of amity and commerce, which established mutual friendship and defense in case of attack -- which the US did not oblige when Japan forcefully annexed Korea in 1910. The US forces would return in 1945 to Korea, to accept Japanese surrender of colonial Korea (albeit the southern half) -- a large "war booty" indeed.